The Good, The Bad, The Ugly & The Crazies 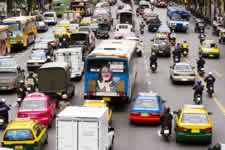 Should you buy a car overseas? Do you need a car? What’s involved in purchasing and owning a car in a foreign country? If you’re new to overseas teaching you probably haven’t given much thought to these questions. A car is, however, something you should consider for a number of reasons and after reading this article you’ll have a good idea if owning a car is for you. In Part 2 I fill you in on how to find and buy a quality car and maintain it, even if you don’t speak the language or have any background in auto mechanics. So, let’s get rollin’ folks. Adventure awaits! To share information or ask questions on this topic click here

About Me and Cars

You could say cars are in my blood. In college I was a car enthusiast and after graduation a professional car mechanic. Many years later, tired of greasy motors and complaining customers, I joined Mitchell Automotive Manuals as a technical editor. It was during this period of my life that I returned to school and earned a teaching credential with the express idea of going international.

While teaching in Thailand I purchased a used car from a newspaper ad. I did the same in Guatemala and Ecuador. In Romania and Pakistan the school supplied us all with cars. In the Congo, well, that’s another story – The American School of Kinshasa rented cars to the teachers and charged a hefty monthly fee and a surcharge of eighteen-cents per kilometer. I’ve had many overseas experiences with automobile ownership and I’m pleased to relate what I have learned with International Schools Review.

Do You Need a Car?

Should you have the good fortune to be at a school that supplies its teachers with cars you’re obviously going to take one even if you only drive on Sundays. If you must purchase a car, or rent from your school, you’ll want to evaluate the situation and decide if you really do need a car. In Romania, for example, the traffic in Bucharest was horrendous, parking was non-existent and taxis and public transportation system were plentiful and cheap. This made owning a car more a luxury than a necessity. In the Congo, cabs were few and far between and very expensive. Owning a car here was far more a necessity than a luxury. You can assess the situation when you arrive at your new destination and since you won’t have a car at first, you’ll have plenty of opportunities to take taxis and buses and see how you feel about using this mode of transport for the next two years. Speaking the local language is an advantage when it comes to using public transportation, as is a good city map. Some preparation while still in your home country will make your early experiences with buses and taxis far less frustrating. Whether you need a car or not is a decision you’ll be able to make soon after your arrival.

Personally, I can’t imagine life without a car and I would think if you had a car at home you would want one overseas. Imagine taking the bus or a taxi to the grocery store, the doctor, nightclubs and movies and to visit friends. Regularly having to hail an available cab and haggle over the price gets wearing in short order. I also don’t like finding myself with a stranger at the wheel every time I go someplace. More than one international teacher has been robbed, and worse, in a cab. You can read about such instances in reviews on the InternationalSchoolsReview.com web site.

Taxis can also be hazardous to your health in unforeseen ways. One night, while on vacation in India, my wife and I were in a cab when she suddenly realized the driver had fallen asleep at the wheel. A swift shove on his shoulder saved us from careening off the road. If you do decide to use taxis as your source of transportation, I advise you to get the cell phone numbers of your favorite drivers and call them directly. You’ll get a fair shake, be safer, and have the satisfaction of helping an honest working person who will appreciate your business.

Besides freedom of movement and security, another advantage of owning a car is having your own “wheels” during school vacations. Trains, and buses force you to plan an itinerary that coincides with their schedules and routes. Plus, just getting back and forth from the station can be as time consuming and expensive as the trip itself. With your own car you set the schedule and you’re free to explore far from the beaten path. If you’re a shopper, the trunk of your car is the easiest way to bring all those great purchases back with you.

Now that I’ve shown you the advantages of owning your own car, I should also fill you in on some of the hassles associated with owning a car overseas. The first gauntlet you’ll face is registering your car. If you’re accustomed to the U.S. procedure of mailing in for a new registration you’re in for an adventure overseas. In Thailand I purchased a Mazda from a British couple moving back home. All went well until I tried to transfer the car into my name and discovered an “important” document was missing. I spent many, many months trying to resolve the problem with no success. Then, one afternoon my neighbor (a Thai woman) listened to my story and took me to the Department of Motor Vehicles where I filled out a short document know as the I Know an Important Document is Missing Form. Thirty-minutes later I walked out with a new title and registration in my name. The moral of the story is get help with the paper work. I felt comfortable buying the Mazda from the elderly couple but in other situations I would recommend taking the seller with you to the Department of Motor Vehicles and transferring the papers into your name. When this is done, pay for the car.

In Ecuador I was showing my car registration to the school accountant. He pointed to a funny symbol in a little blue square and said, “Oh, this is good”. It turned out the symbol meant no money was owed on the car. Imagine buying a car and then finding out the seller still owed the bank thousands of dollars. However, I did end up paying almost $500 in bribes to get the car into my name.

At least the paper work problem is only a one-time problem and if you’re not put off by bureaucracies you’ll do fine. Then again, you may want to stay completely clear of situations like this. Different personalities have a different threshold for tolerating the shenanigans that go on in countries where everyone on down the line extracts a little money from you.

Most everything else related to owning a car overseas is very much the same as it is in the States. Purchasing insurance and getting the car repaired pose no special problems. I normally take my cars to the dealer for service and repair. They have all the necessary parts on hand and the price is very reasonable. So reasonable that I usually find the tools I have brought with me never leave the toolbox.

In some cities foreigners are the target of corrupt officials out to extort money. In Thailand we joked that the police should tow a small bank with them to allow for immediate deposit of the money they were extorting. I remember an incident in which a taxi pulling out of a side street rammed a tourist’s vehicle stopped in traffic. The judge ruled in favor of the taxi driver, saying “None of this would have happened if the tourist had not come to Thailand on vacation”. In Ecuador, the police pulled my friend over, got in his car and together they drove to an ATM machine so he could pay the bribe being demanded in exchange for not receiving a ticket.

Not all countries are as corrupt as Ecuador and if you can look upon all this as an adventure that may cost a few bucks then you’ll enjoy owning a car. I would rather pay $30 dollars in bribes than face a $180 ticket in California and a substantial increase in my insurance premium for driving 8 miles over the speed limit.

I will admit that in some countries the style of driving borders on intimidating and is enough to dissuade you from getting behind the wheel. But take heart; driving in such cultures can be a relaxing experience. To the uninitiated, the daily commute may well look like total chaos and it may be just that. But there is an upside to this. In such environments drivers must be alert and constantly reacting and interacting with each other. This is why you see so few accidents, let alone fender benders in this disorganized type of driving situation. In the US the typical driver is daydreaming as they glide through a red light and slam into the car they never saw. Out on the rule-less, congested roads found in many countries you will discover traffic moves at slower speeds than in the States, allowing time for drivers to react and avoid accidents.

Driving on the opposite side of the road to which you are accustomed does add an additional challenge to your first days out on the road. Pakistan and Thailand posed this problem for me but I discovered when I accidentally drove on the wrong side of the road, against traffic, everyone simply moved over as if it was quite normal. In Thailand It was acceptable to turn onto a main road from a driveway by first driving beside the curb, against traffic, until it was possible to shoot across to the other side of the road and continue on your way. I imagine my mistakes looked like a bold version of this merging technique to the local drivers.

The point is that with drivers more alert and proactive and moving slower on the road you need not worry that you don’t have a clue about how to deal with the apparent lack of order. Just drive in a straight line and everyone else will ebb and flow around you. As you gain confidence you can do a little interacting of your own.

To Ride or Drive?

I hope I’ve given you some solid insight into what life is like with and without a car overseas. For me, the freedom a car provides makes the overseas experience so much more rewarding that I hate to even think about the great adventures I would have missed had I been relegated to buses and taxis. Only you know best what is right for you and what sort of responsibilities you’re willing to take on overseas. Should you decide to purchase a car be sure to read Part 2 in which I tell you how to find a good car overseas, even if you don’t speak the language or have any background in auto mechanics. Until then, happy motoring. Go to part 2